I went on a bike ride today with my new toy. I started by following the Minuteman Bike trail from Arlington Center to Bedford. Then I started back, but I deliberately got off the trail (it would be hard to do so accidentally) and just rode in a direction that I thought would take me a ways east and south. After riding for a while that way, taking semi-random turns and ending up somewhere completely unfamiliar, I asked my toy for help. 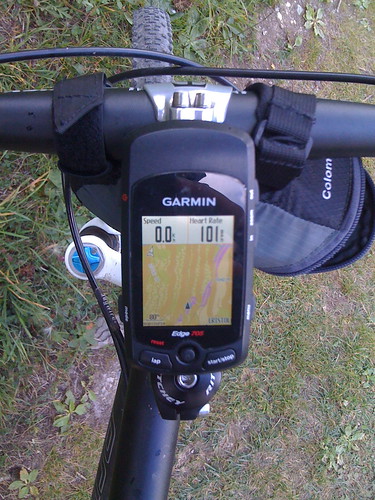 I confess that this is someone else’s picture of their toy on their bike, but you get the idea. I thought I would extend what’s normally just shy of a 20 mile ride by a mile or two. But here’s what I ended up with:

You can see what I great sense of direction I have. At least I didn’t end up going west! Anyway, it was a fun outing and a fun, successful test of the new toy. It also records tons of data to analyze later. Hopefully it will be interesting to me at some point.

One response to “Get Lost!”