While our main goal on this trip is to have fun and see many amazing wonders, which we certainly have been doing, we had a few personal guidelines to help us make decisions along the way:

1. No fast food – Subway is allowed but we haven’t been there yet and Dairy Queen is allowed for ice cream only. Unfortunately some of the food at tourist places like Niagara was not much better than fast food – we have been having lots of picnics. So far, so good.

2. No Wal-Mart – we were directed to Wal-mart when we asked about the nearest grocery store – but we declined and waited for a better opportunity. So far, so good.

3. Return in better shape than when we left (parents mostly) – no great progress to report on this one, but we are plenty active when we get out of the car, so I think we are holding steady. There will be more hiking in the 2nd part of the trip.

Just a little insight into the strange workings of our minds.

More about our fun day at the Rockies game in another post!!!

After camp breakfast (cold oatmeal, made with lukewarm water heated over the remains of the campfire), we headed out to Mt. Rushmore. 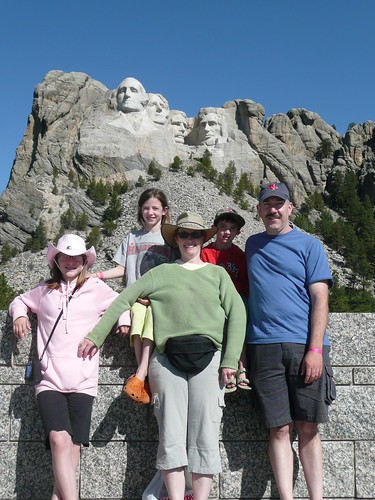 In spite of the cold beginning, the weather was glorious today. We had a great visit with the presidents, including a brief tour with a guide who was clearly still honing her skills.

From there, we thought to stop by the Crazy Horse monument on our way to Jewel Cave. But when we drove in, we discovered it was nearly $30 just to get a closer glimpse than you do from the road. Oh, and also for the opportunity to buy souvenirs. So, we turned around after taking a picture. 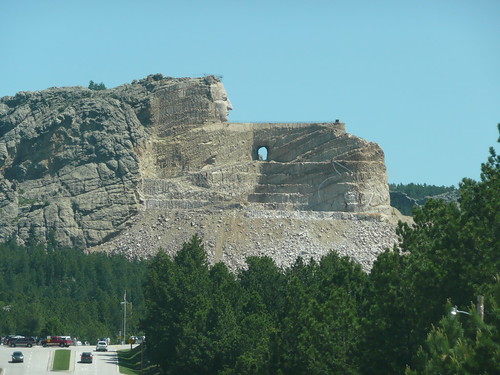 We had lunch at the Cowboy Cafe in Custer City, where I had a buffalo burger, just for some authentic something or other. It tasted unsurprisingly a lot like hamburger. It was drier, and I think that’s because it’s a leaner meat, rather than overcooking. But who knows.

After lunch, we went across the street to the mini-golf place that only took cash, and played a round of 18, which takes nearly forever with a family of five. Two of the children took turns being cranky.

From there, with a little time to kill, we stopped at the National Museum of Woodcarving, also about $30 to get in, but it seemed more worthwhile than Crazy Horse. After having paid, we learned that it is really a gallery of one person’s work. An amazing artist, to be sure, but I found the name to be rather deceptive. 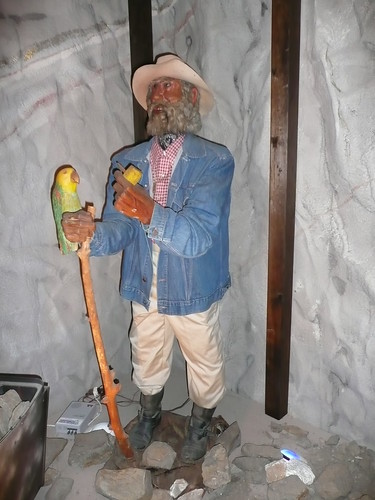 Then finally, our appointment at Jewel Cave. And the cave did not disappoint. We had a tour of about an hour and a half, which started with a 27 second elevator ride down 230 feet. It’s an amazing cave, with many large caverns, and they’ve built in platforms and stairs and catwalks and sidewalks for a great walking tour (lots of steps, though!) The kids did not get bored, even though much of the crystal structure was the same throughout. This guide seemed much more at ease and practiced. Highly recommended. 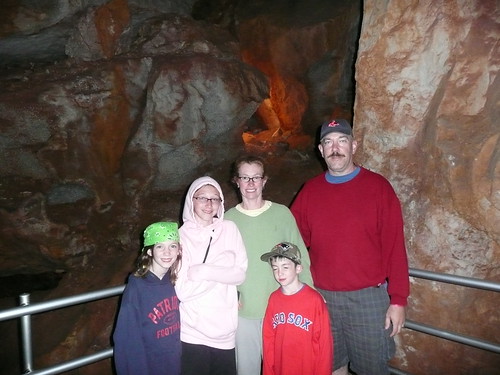 Thank God it didn’t rain. I think the last time I camped at all was with Susan and some grad school buddies at the Delaware Water Gap long before Emma was born. To label me out of practice would be generous. We packed gear for summer camping — our borrowed tent is a glorified screen house with a rain fly (no offense, Alexx — thanks for the tent!)  so when we woke up this morning in 41 degree weather, we were all a little chilly. About 4:30 in the morning, Susan, Tyler and I were awake, with Tyler shivering, and me pretty cold as well. Tyler’s sleeping bag is essentially a folder over fleece blanket, and as we had lost his sweatshirt, all he was wearing under that was regular pajamas. So he climbed in with Susan. I think they went back to sleep, but I could not. At about 5:30, Clara awakened, so we went out and started a camp fire. Fire == Good.

I’m also a little put out as I am lacking DC adapters for some things, including my camera battery. And I can only charge one of the two laptops, so at the moment the “server” laptop is shutdown so that I have this one for actually doing stuff.

But we’ve survived, and even decided not to go to a hotel tonight. We are hopeful that the weather will be warmer for our next camping experience, in Utah.