It started snowing mid to late afternoon Monday, but the snow was pretty light until later in the evening. The governor declared a state of emergency, asking everyone to stay off the road except for emergencies. So why, oh why, do the plows go by so often on my little street? I can understand not waiting until the storm is over, but I think realistically there’s no need to plow every 1/4 inch that falls. Sheesh.

I suppose I could rightfully be accused of thinking too often that I can solve a problem around my house with the application of just a little more technology. Guilty as charged. But for some problems, technology is the best answer, or the only rational answer.

Nicholas Negroponte is also a “TO.” I love the vision of the One Laptop per Child organization he helped to found, to “empower the world’s poorest children through education” and to provide that education, in part, by providing

each child with a rugged, low-cost, low-power, connected laptop. To this end, we have designed hardware, content and software for collaborative, joyful, and self-empowered learning. With access to this type of tool, children are engaged in their own education, and learn, share, and create together. They become connected to each other, to the world and to a brighter future.

I bought two of these XO laptops, for my two older children, when the devices first came out. The organization had a “Buy One, Get One” campaign at that time. I would have called it a “Buy Two, Get One” campaign, though, because you paid for two devices and only received one. The other one went to a child somewhere the organization was deploying them, generally in conjunction with federal governments. Each “pair” of laptops cost $400 at the time. They were really nifty devices, so well thought out for their purpose like no commercial product could be. They were designed to be serviceable and rugged. The screen was an amazing piece of technology developed just for the XO — it was a color display, but had a monochrome mode that was enabled by turning the backlight all the way down. And in the monochrome mode, the screen was completely readable in the bright sun. This was important to them, because in rural African villages, which were one of their target “markets” that’s where school is held!

The devices were also designed to work together to provide a “mesh” network, so that if there was internet access in a village, the laptops themselves could extend the network outward to homes. They also came up with innovative chargers, and other adjunct bits of support technology. Later on, I bought a third one from a friend who had bought a couple, but wasn’t using one.

In the end, my kids treated the devices more as toys than anything else, at least in part because they had easy access to computers at home that were much more powerful. And I happily donated the three back to the foundation. They continue to work on innovative hardware and software to help spread knowledge and educate children.

So today my Twitter Feed had a link to an IndieGoGo campaign that sounded intriguing and very “TO” — the Lantern. This is a nifty, pocket(ish) sized device that receives all kinds of content over a satellite link, and can provide a wifi hotspot that any wifi enabled device can connect to in order to consume the content. It’s not an “active” connection to the internet, but rather acts like a web server with static content. They plan to provide the content of wikipedia, among many other things, including near real time news and weather info. This can help in areas where other infrastructure has been affected, or where governments restrict access to the internet. And as it’s a broadcast technology, nobody can easily track who’s receiving the data. They compare the drive to get these devices out to people like Andrew Carnegie’s building of public libraries, and it’s not hard to see why.

A long, long time ago, we had an amateur weather station (Oregon Scientific WMR-968) at our house. It had a wind vane/anemometer; a rain gauge; an outdoor thermometer/hygrometer; and an indoor thermometer/hygrometer/barometer. It came with a nice LCD display, and all the instruments communicated their data to the display wirelessly. The instruments also had a small solar panel, and a battery compartment, all weather-tight. The solar panels charged a built-in pair of small rechargeable batteries, and the batteries would power the instrument and the radio. There was also room for you to install fancy/expensive Lithium AA batteries which would allow the instruments to work down to -40 F. The console could be connected to a computer as well, and the computer could run software to gather the data from the instruments, log it, and even post it on the internet! We ran our own little weather site, a sub-domain of tastewar.com, but also posted the data to some other sites, notably The Weather Underground. (Not to be confused with the Weather Underground). It was fun knowing that we were helping to provide a “public service” and conceptually having all that weather data on file.

Well, eventually (after a good number of years), the instruments began to fail. I think a big part of it was the built-in rechargeable batteries. I made a half-hearted attempt at building new battery packs from rechargeable cells I bought on eBay, but never really succeeded, and the station fell into disuse until it was only a clock (yet another clock that had to be reset whenever the power went out). And long before that, the PC that had been logging the weather and posting it to the internet had been replaced with a Mac, and I never took the time to find good Mac software to do the same thing. So we’ve been out of the weather picture for a long time. But it’s always been on my mind to get back in the game.

This Christmas, I used my Christmas money to buy an inexpensive weather station from Costco. 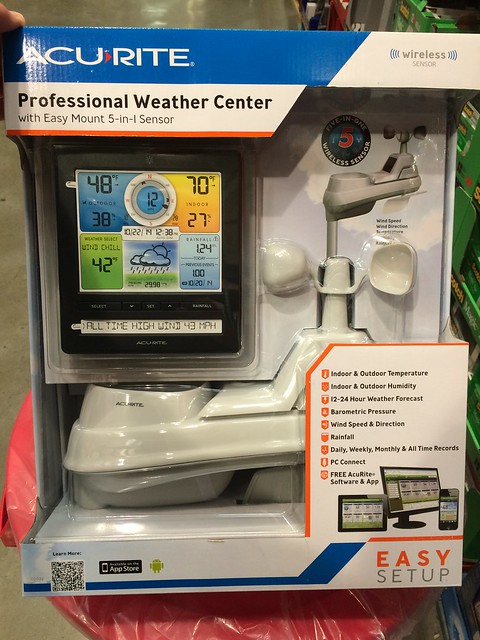 It’s an Acurite 5-in-1 with a snazzy display. 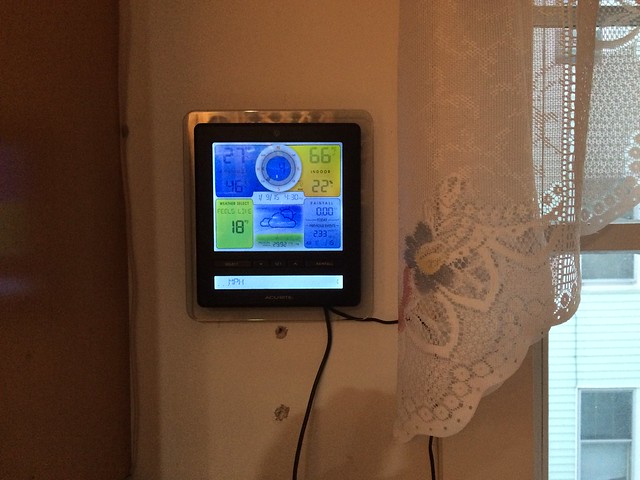 It provides the same basic instruments as the old station, but all the outdoor instruments are housed in a single package. This certainly makes installation easier, but the downside is that the location for each instrument is somewhat compromised. Your anemometer/wind vane is supposed to be up as high as possible, away from any obstructions. Temperature readings, on the other hand, are supposed to be taken at four feet above ground, and the instrument should be out of direct sun, yet away from buildings, etc. Similar for the rain gauge, etc. Oh well! I am just excited to have a weather station again! 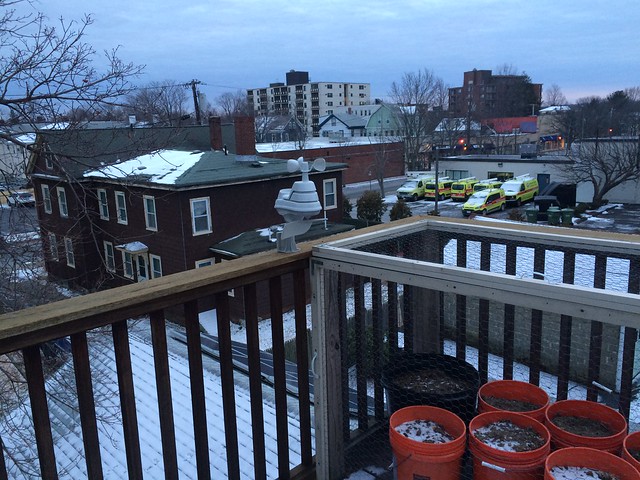 The console for this station can also be connected to a computer, and of course, you can run software on the computer to log the data, post to the internet, etc. This time, though, it’s not connected to a big, traditional PC, but rather to a Raspberry Pi, 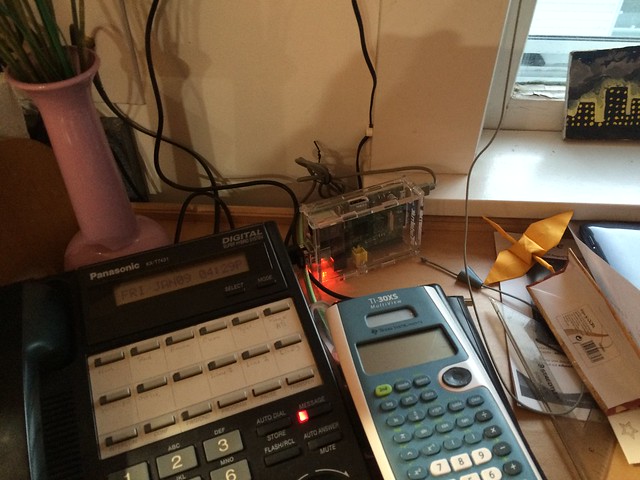 so it’s very unobtrusive. We are using Meteohub software which is the only Linux package I could find that supports this station. You can view our weather data at The Weather Underground. Someday, we may re-create our own weather site as well.