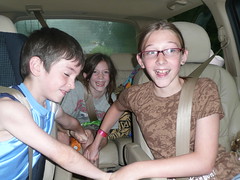 Today’s forecast looked pretty good in the morning, with an increased chance of rain in the afternoon, so we decided to head over to the Botanical Gardens early, and make our way over to the BioSphere later, since we’d be mostly inside. The gardens were lovely

and we got to see many styles of garden, but still felt like we barely scratched the surface.

The Gardens are also right across he street from the main stadium from the 1976 Olympics, so we got to see the outskirts of that as well

After an unintentionally expensive lunch, we went to the BioSphere, which had interesting exhibits about the environment and our effect on it. We got to see a presentation on cyclones, which used Katrina and Hyaiyan to highlight their destructiveness. Emma had just lived through Rammasun while visiting there and saw some of the devastation that Haiyan wrought up close. Another exhibit showcased artistic ways of turning refuse into dresses. Here’s an example

Once we had finished at the BioSphere, we split into two groups. Susan and Tyler took the Metro back to the Old Port where they rented a bicycle car

and on the walk home from there, they came upon (but did not fall into) a Burning Ring of Fire

. Meanwhile, the girls and I rented Bixi bikes and rode to the Old Port. Along the way, while we were riding across a bridge, the skies opened up on us like never before. Emma and Clara had puddles in their shoes. But we did get something out of it