On a winter’s Sunday I go,
To clear away the snow,
And green the ground below.

On Friday night, Susan and I went with friends to see our favorite band, the Decemberists, play at the House of Blues in Boston. It was a fun night, which started with dinner at the H.o.B. The opening act was a band called Wye Oak, who were interesting in part due to their configuration: a female lead singer/guitarist, with a male drummer/backup singer. And the drummer only used 3 limbs for drumming — his left hand was playing keyboard and/or twiddling knobs. So they had a surprisingly rich sound for a two person band. His drumming looked rather frenetic as well, as he tried to do two arms worth of drumming with one. So they were intruguing, and I even sort of liked the vocalist’s voice, but you (I) could hardly understand any of her lyrics. And she was quite the shredder on guitar; not my particular favorite style. Anyway, curious enough.

The D’s came on at shortly after 9:00, and played until about 10:15 with a brief break. Disappointingly short set, but we learned later that Colin apparently was suffering from a stomach flu. Sorry, Colin. Last time we had tickets to see them, someone in the band got rather sick, and they had to cancel the remainder of their tour. That one was called The Long and Short of It, and it was two nights: one for their long songs, and another for their short ones. We had tickets to both nights, which was quite extravagant for us, and so very disappointing to have it canceled. But again, our feelings were with the band (mostly). We missed them when they came around for the Hazards of Love tour, which certainly would have been fun. Anyway, I can’t claim to be much of a music critic, but we certainly enjoyed the show — it was a good mix of material from their new album, and older tunes. And on the bright side, it saved us some baby-sitting money 🙂

Actually, we’re almost done here, but it’s hard to find the time to write, especially when there’s no free wifi and Internet access in our room costs $9.95 per night. How antiquated.

We came here because Clara had an optional travel meet at Disney, so we opted to make a short family vacation of it. We thought we were taking the kids out of school for two days, but Friday turned out to be another snow day, so it seems as though they’ll just miss one day. Here’s one pic of us by the castle. 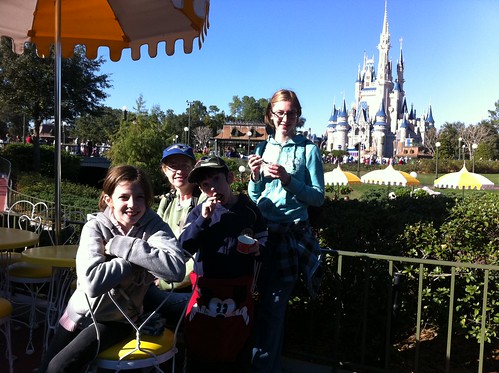 Well that was fast! Two weeks and a day after the last blizzard of 2010 comes the first one of 2011. Working at home today, but still decided to brave the weather and get coffee at the Starbucks around the corner. Here are a few pictures from the walk. Mind you, the overnight snow was supposed to be only a few of the 12-16 inches we may get, but I’d guess that at least 6″ has fallen so far, and the road which was last plowed a little over an hour before these pictures were taken has 2+” additional already.
[set_id=72157625681581695]